A unique natural selective kappa-opioid receptor agonist, salvinorin A, and its roles in human therapeuticsPhytochemistry, May 2017

4 replies to this topic

A unique natural selective kappa-opioid receptor agonist, salvinorin A, and its roles in human therapeutics 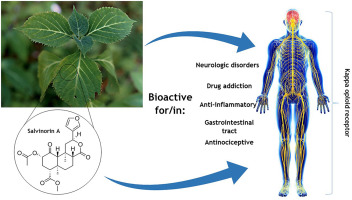 • Salvinorin A has various biological effects.

• Salvinorin A could be used as a therapeutic agent in various disorders and/or pathologies.

Until the mid-60s, only the Mazatecs, an indigenous group from Oaxaca, Mexico, used Salvia Divinorum (S. divinorum) due to its hallucinogen properties.

Later it was found that the hallucinogen effects of this plant were caused by the presence of a neoclerodane diterpene Salvinorin A (salvinorin A), which is a highly selective agonist of kappa-opioid receptor (KOR) that cause more intense hallucinations than the common hallucinogens as lysergic acid, mushrooms, ecstasy and others. In fact, smoking of only 200–500 μg of S. divinorum leaves is enough to produce these effects thus making it the most potent natural occurring hallucinogen known.

Due to its legal status in various countries, this compound has gained a worldwide popularity as a drug of abuse with an easy access through smartshops and internet.

Furthermore, salvinorin A gathered an increased interest in the scientific community thanks to its unique structure and properties, and various studies demonstrated that salvinorin A has antinociceptive, antidepressant, in some circumstances pro-depressant and anti-addictive effects that have yielded potential new avenues for research underlying salvinorin A and its semi-synthetic analogs as therapeutic agents.

Also tagged with one or more of these keywords: Review, Salvia, Salvinorin A